I use one of these with my Cumulus 350 quilt:
https://www.ultralightoutdoorgear.co.uk/cairngorm-treks-review-exped-synmat-hl-m-i1414

With a snozzle to inflate it.

I carry the foil/foam mat all the time because if is nice to sit on and protects the mat as well as supplementing its warmth. I don't have anywhere near the experience that those above have so maybe listen to them rather than me.
Last edited: Nov 2, 2020

I have a multimat superlite S and a very old (bought used) prolite. The multimat is a nice weight (350g) but the shell material does not instil confidence, I had two micro punctures probably picked up from indoor use. Went through a few nights otside quite well, though.
The prolite is a little heavier (40ish g) and about as thick, but somehow it's much more comfy. I'm not sure why. The shell material seems a bit stronger. Prolite is slightly more tapered to the bottom as well.
S

Perhaps I am, or was to be more accurate - I do feel the cold somewhat now I'm in my seventies. I remember hikeing through snowdrifts in shorts as a teenager. My scout troop had a reputation for being tough!

Unlike most on this site I use synthetic sleeping bags and they provide vastly superior ground insulation compared to down which I regard as non-existant. The reverse is true wrt topside warmth - which explains the popularity of quilts.

I'm draught phobic - so I hate all mesh inners, duvets and quilts. At home it's a sheet and (winter only) fleece.

On the rare occasions I camp on snow/ice these days, I do supplement the mat with a foam backed foil car windshield solarscreen (currently £2.50 at Aldi). No need to be unnecessarily cold.
V

Teepee said:
Using a comfy uninsulated air mat and then supplementing it with as many insulating mats underneath is the the most flexibe and reliable way of getting a half decent nights sleep.
If the airmat deflates, you still have some warmth and padding.

CCF has it's downsides (bulk), but it is also capable of being lounged around on in camp and it won't ever burst.

FWIW, I'm currently on an Etherlight but it's early days (only 60 od nights) and I still take at least a 2mm reflective CCF mat to sit on in the tent as lounging around on any of these UL mats is a recipe to get puncture.
Click to expand...

Thanks. The more I spend on a fancy mat the more I want to put some foam under it, which negates the fanciness of the mat to some extent because I need less r value.

Princess and the pea jumps to mind

You could have a competition with @Fossil Bluff

I stopped using inflatable mats after sending two back to Thermarest for replacement. When the second one went back I asked them to send a Prolite Apex as a warranty replacement instead. It’s a bulky beast but high R value and I have no anxiety about punctures etc. No need for a CCF mat but I do take one sometimes if I’m on a more social camp and want to lounge about.
THERMAREST 2020 ProLite Apex Regular Self Inflating Mat
ASTM R-Value: 3.8 / Dimensions: 183 x 51 x 5cm / Packed Size: 28 x 17cm
Weighs 652g (excluding bag)

As some of you will know, I ditched my Essentials inflatable mat when it developed a slow leak. At only 269g, it was the lightest inflatable mat I could find. I'm a side sleeper and when it went flat, it left my left side lying on the cold ground, and it was then that I discovered that putting my WWAGO sit pad under my hip (which was the only part of me feeling the cold), felt warm and comfy, I instantly dreamt up the design of the mat that I use now.
I decided to order 6 more WWAGO sit pads on aliexpress, and whilst they were on their way I experimented by cutting an army surplus roll mat down to size. It started out at 265g, and after cutting I got it down to 175g. But even though it was much smaller rolled up that it was originally, it was still too big to fit inside my pack.
When the WWAGO sit pads arrived I taped five of them together with 4 inch strips of olive green duct tape, to make a mat 185cm long x 28cm wide (perfect for a side sleeper like me) and I cut the sixth one down the middle and attached it on either side with velcro as knee pads.
I have no idea what it's R rating is, I just know that it's warm, cozy, cheap to make (£8.50), can never go flat, packs pretty small and it only weighs 148g: 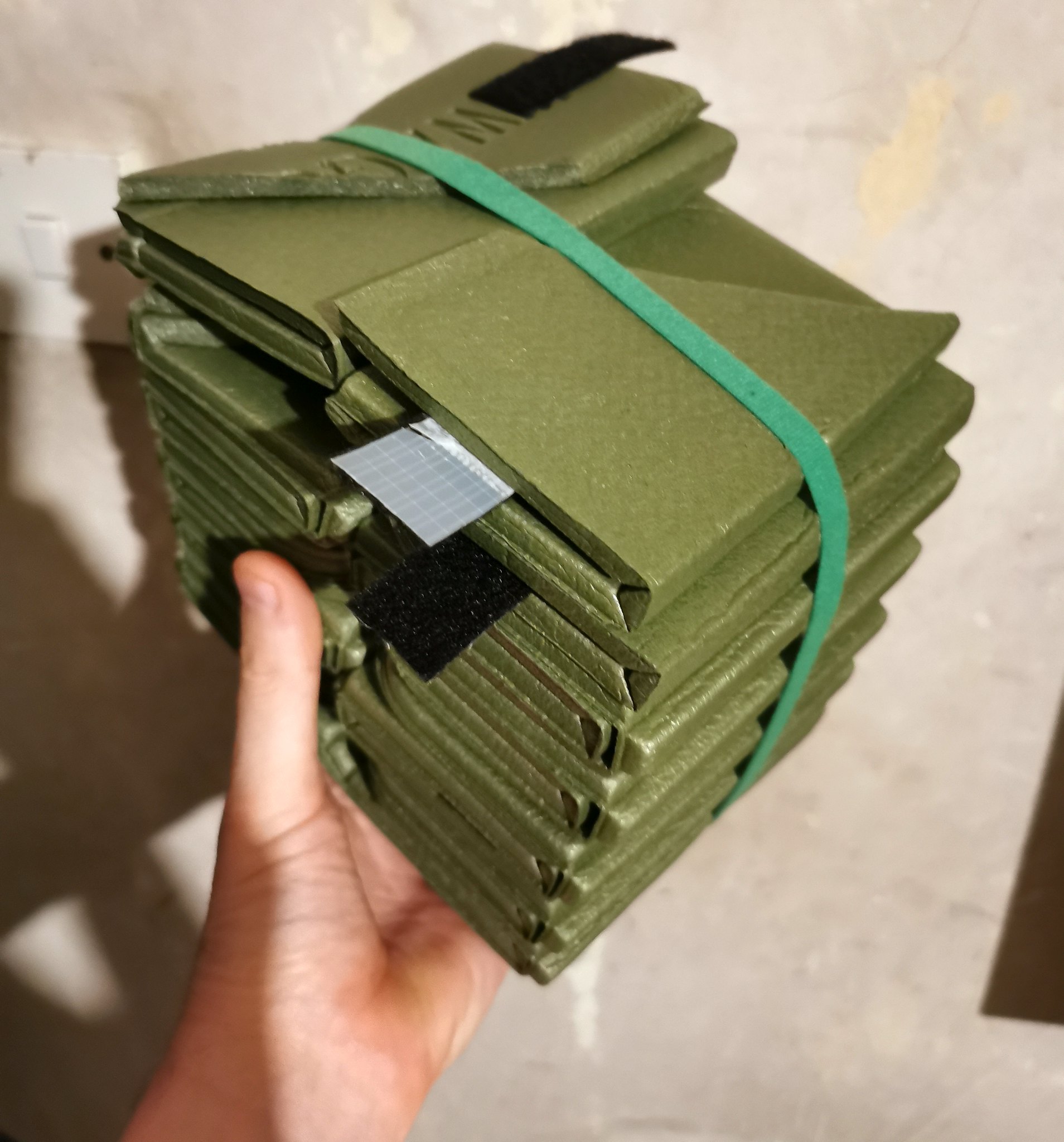