For @liamarchie and other hikers who aren´t afraid of big backpacks.

Gott im Himmel! That's one heck of a pack he has lugged to some very nice places!

Some people just gotta have their kitchen sink installed in the tent every evening.

The main reason I share his hp with you is the fact,that he user a sub 1kg tent for his trips. @liamarchie (and many others incl.myself) doubted that it would be the right choice for this kind of trips but Bernie´s very happy with it.UL in a very different way.

Staff member
Taking a lightweight tent would allow him to carry more weight in that small house he's carrying on his back.
Not my style but good on him for doing what he wants.

I met a guy on the GR20 who had a pack like that; he was German....he carried all his food for the whole trip.

You really don't need to.

@fluffkitten : I like his way of thinking.He has to carry 30+ kgs through really difficult terrain and still tries to save weight wherever it is possible.Still pushing limits and who of us would habe expected a BA CS 1 UL in 5300m? So his thinking is UL
And honestly,I´d never be able to do what he does.

@edh :Could very well had been him!

This was what I call a big pack, spotted in the Pyrenees this summer (poor long range shot on the phone).
No it's not a hobbit!

Whiteburn said:
This was what I call a big pack, spotted in the Pyrenees this summer (poor long range shot on the phone).
No it's not a hobbit!

That would destroy me, I'd be squashed into a blackhole under it.

) is doing terrible things to his posture and back .

edh said:
I met a guy on the GR20 who had a pack like that; he was German....he carried all his food for the whole trip.

You really don't need to.

I met a few guys like that on my Corsican trips. One Polish solo hiker carried two!!! 250 gas bottles... 18kg all in all. Nice guy who suffered badly but always kept his spirit up.

Well, BernieHH did an unsupported solo hike through some pretty remote parts of the Himalayas (even by Himalayan standards) - it ain't Corsica or the lakes - not much resupply or much of anything there. Even UL Justin Lichter had to take some fairly bizzare measures to get supplies on his 2011 great Himalayan trail. So hats off to BernieHH- pretty impressive whatever the pack weight...
Last edited: Feb 10, 2018

Reminds me of someone who posted a photo on the French UL forum of some guy he saw on a GR with a huge rucksack with a comment along the lines of "Some people never learn, his pack was big enough to carry a paraglider! Ah, ah!".

As it turned out, the guy in question was a member of the forum and had a pretty low base weight which, in fact, allowed him to carry... all his paragliding stuff. And enjoy his paragliding where no paragliders went.

"Some people never learn, his pack was big enough to carry a paraglider! Ah, ah!".
Click to expand...

Yes I’ve also been looked at funny by walkers when I’ve been lugging my paraglider about the hills! We don’t have a lot of space or weight allowance so are forced to use light weight kit - example of my bivy kit below in the Indian Himalayas (bush buddy essential, cheap Indian whisky not ...) it does allow for a spectacular mode of travel sometimes as my pic flying in the Hindu Kush mountains of NW Pakistan hopefully shows. 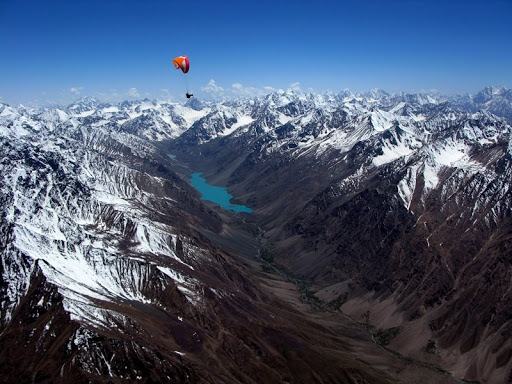 How much does the paragliding kit weigh?

@ColinHawke Beautiful !!! Are you able to carry your pack and all your kit on the paraglide?

Hi, for lightweight kit the glider is around 3kg and the harness a similar weight. But with a reserve parachute and basic instruments (variometer) you are looking at around 10kg. Add to that the bivi kit etc. and it adds up.

Yes we carry all the kit and regularly fly 100+km in a single flight using thermals alone. If you land on a south facing slope, bivi the night, launch when the sun hits the south slopes and starts the thermals for the day you can carry on your journey. The name for this activity is vol-bivouac. Red bull sponsor an endurance race across the alps which is exactly this and the person who wins is the first to land in Monaco. Google Red Bull Xalps. It’s fun!
Last edited: Feb 10, 2018

Interesting discussion coming up in this thread.As I wrote, my main goal was to show that a UL-tent like Bernie´s Fly Creek UL1 ( thanks to @Lady Grey for the correction) seems to be sufficient for such expedition-like trips. The second thing is his way of UL-thinking.Since he has to carry up to 25 kgs of food and fuel it is obvious that a GG G4 wouldn´t be the best choice.So he´s willing to carry a 4,5 kg Bergans-pack and tries to keep his BW lower by avoiding extra "safety" like a Hilleberg Staika (my choice for a trip like this

Chris2901 said:
The main reason I share his hp with you is the fact,that he user a sub 1kg tent for his trips. @liamarchie (and many others incl.myself) doubted that it would be the right choice for this kind of trips but Bernie´s very happy with it.UL in a very different way.
Click to expand...

Yes, as long as you're a happy camper then no one can blame you!
I've done quite a few 20kg+ trips in my days but I don't miss them. Sure they were fun in one way but looking back I know what I don't want anymore

@andreostergard :Same with me.Neither I wouldn´t be able physically to do such expeditions anymore nor would it make me happy to risk my health or more during my holidays.But personally I do have much more respect for his trips than for example a PCT Thruhiker

...ehmmm, the PCT is hardly a walk in the park (its a walk through several)...

Well,I´m not saying that a PCT-Thruhike is a childs play but I PERSONALLY rate Bernie´s performance higher,since his focus is on TREKKING without infrastructure in more demanding conditions.The PCT is a very long,very good organized trail and has other demands.But I don´t want to start a discussion about better and worse...